What’s Missing in the University of Minnesota’s Strategic Plan? 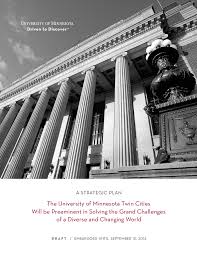 The latest Strategic Plan for the University of Minnesota soars enough to elate most visionaries. And since I tend to that end of the spectrum, you would think I would be a happy Minnesota camper.  But, alas…

The key phrase in the document, which is currently a draft but which has already been shared with the University’s Board of Regents, is “Grand Challenges.”  The idea is that in years to come the University will organize some of its curricular and research efforts around the foreboding challenges “of a diverse and changing world.”

Sounds like the kind of thing that would engage a Kingdom-oriented follower of Jesus Christ who believes that Jesus created all things, that in Him all things hold together, and that He has reconciled everything to Himself (Colossians 1:15-20).   There is an eagerness among many of Christ’s followers to be part of solving problems, and they are enthusiastic about partnering with academic institutions to find those solutions.  Their vision for human flourishing (the underlying concept behind the Hebrew word shalom) fuels this desire.

You would think that a strategic planning document with this emphasis on big challenges would identify issues like “Finding solutions to religious-based terrorism” (anyone watched the news lately?) or “Analyzing how religion can be a source of renewal in poverty-stricken communities around the world.”  It’s hard to travel in places like Africa, where I was about 45 days ago, and not discover that the most trusted institutions are religious, and that most people think they offer the best solutions.

Unfortunately, the reader will search the 85-page strategic plan without ever reading a single reference to religion (except a single minor reference to “faith traditions” as a recruiting tool for prospective University of Minnesota faculty).  The plan proposes working with community partners to solve these grand challenges, but not once do religion or religious institutions appear in a document that is the product of hundreds of hours of work by the University’s finest.

Frankly, most of us who have worked in the academic arena for a few years would be surprised if the academics who construct these documents had any idea that religion has anything to do with solving big problems.  Thanks to the secular revolution of the late 19th and early 20th century when secularists took over universities, and thanks to the forces of secularization and privatization, our universities are black holes when it comes to engaging religion to solve problems.  Blindness rather than venality explains the problem.  When your worldview is either materialist at its core (by virtue of either scientific naturalism or postmodernism), you don’t “see” data that indicates there is a reality that transcends our finite space (God).  You don’t recognize what others might call “religious” or “spiritual.”  This blindness owes itself to what I call the problem of the filter function in our worldviews: We only see data that confirms to our pre-existing worldviews, or understandings of reality.  Thus, most academics are simply clueless that another world exists beyond the purely material universe and their academic discipline.

Will the University of Minnesota solve “grand challenges” without facing up to the roles of religion in our societies?  I hope so, but I doubt they will be successful, except perhaps in marginal ways that involve technology.  But, for the big social problems?  No chance.

The rest of us will still be telling the story of the Good News of the Kingdom, urging and persuading our neighbors to embrace the One who claims to be the Solution to Grand Challenges.  He rightly deserves to be considered and honored in the research and curricular agendas of our academic institutions. He’s called the Savior of the World, and He’s waiting.