A few days ago on September 27th, Andrew “Anne” van der Bijl better known as “Brother Andrew”, or “God’s Smuggler” went to be with his Lord. One of the humble giants of the faith has gone to his eternal reward. His remarkable life was one of bravery and courage, tied to his faith in God. Through this faith, he stood up for the forgotten and the persecuted at great personal risk; a life very well lived. Brother Andrew founded Open Doors which focused on bringing God’s Word to those who are denied it, among many other things including highlighting religious persecution globally.

Tracing Brother Andrew’s Godly influence on my life I must look back to my childhood. In 1972 my parents bought me the first two comic books ever published by Spire Christian Comics, The Cross and the Switchblade about David Wilkerson and Nicky Cruz and God’s Smuggler 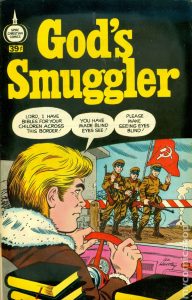 about Brother Andrew. I was seven at the time, but reading these comics led me to read both books (Parents: never underestimate how you can influence your child’s reading). It was God’s Smuggler 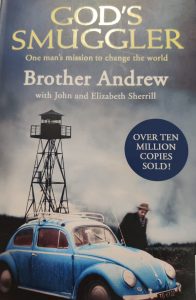 that truly captivated me and influenced me the most. I was taken in by both the bravery of Brother Andrew and his absolute faith in God’s protection for the righteous work that he was doing. This was during the Cold War, and the Soviet Union and the Warsaw Pact were the existential threats. Yet through this, Brother Andrew stood up and did something for his fellow Christian believers because he could.

Fast forward to my college and post-graduate years and I too was smuggling Bibles behind the Iron and Bamboo Curtains. I learned to trust God even praying Brother Andrew’s “smuggler’s prayer”, “Lord, please make seeing eyes blind.”  Each time I crossed a border my faith grew and my trust in God deepened. I also learned to see all peoples as children of God. The Soviet people were not evil people, they were children of God just like I was. Soviet Christians were my brothers and sisters in Christ. I also learned that I had many brothers and sisters in Christ living under persecution globally. While fellowshipping with them, I learned that they were praying for us in the West. As one East German Christian told me, “We can see over the wall all the temptations that would take you away from Christ. Here in Berlin our choice is simple, follow Christ and face the earthly consequences or reject Christ and face the eternal consequences. You face daily temptations that would slowly tempt you away from Christ. That is why we pray for you to be strong!”

The fearless example of trust in God by Brother Andrew, to never give into the corrupting temptations of this world, inspired many more Christians than just me. His choice was to focus on “…laying up treasures in heaven…” (Matthew 6:19-21) by doing good work and being an example to others. Being a redemptive change agent means trusting in God. Our Wilberforce Mentees and Fellows walk the same difficult path by the world’s standards, many are giving up comfortable lives here on this earth for the joy of making life better for others and pointing the way to the cross. Jesus said, “…take up you cross and follow me.” (Matthew 16:24-26). Brother Andrew followed Christ. We all look forward to and hope for the words that rang out in heaven on September 27, 2022, “Well done thy good and faithful servant…enter into the joy of your Lord.” (Matthew 25:21) Thank you, Brother Andrew, for being an example to us all of a life well lived for Christ! 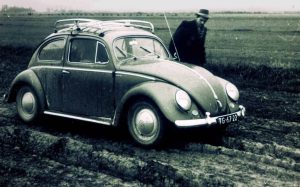 Brother Andrew and his VW Beetle used to smuggle Bibles. (Circa 1960s)