Wilberforce has employed a strategy that focuses on the training and mentoring of international students to become redemptive change agents. Mentoring has involved foundational training through the Wilberforce online course Comparative Worldviews and the development of redemptive projects for their home societies. Early on, we made the strategic decision engage in long-term mentoring, which meant that staff and mentors traveled to visit mentees in their home societies, reengaging with them to build on the original foundation. 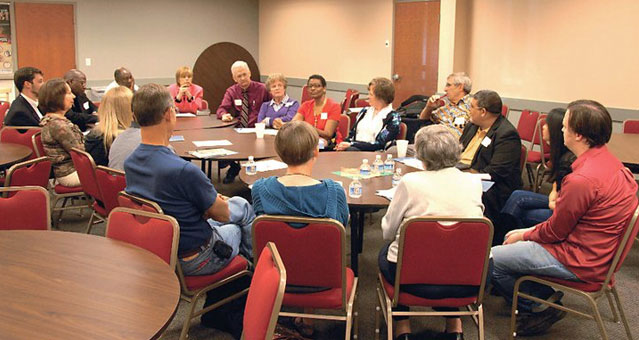 Beginning in 2015 we added another component to our mentoring strategy, namely, a biennial Global Summit, which brings together our mentees for four days of advanced training and gives them a platform to report on their redemptive projects, exchange ideas, network, and be spiritually refreshed.

The long-term mentoring strategy was supplemented in 2018 by the launch of the campus expansion program, intended to provide materials and introductory training so that campus ministers could begin mentoring their international students for redemptive change. It invites other campus ministers and small groups of their students to engage with a five-lesson study that introduces them to the vision of becoming redemptive change agents for Christ. This expansion effort was funded by a $40,000 start-up grant provided by a Christian foundation.

Developing a community of thought and practice

We are an organization that prioritizes redemptive efforts that flow out of a Christian worldview, thus the Institute is devoted to developing communities of thought and practice. In the 2019, the Board approved the launch of an Education Working Group, and in 2021 an Africa Working Group. These working groups provide in-depth and specialized training and strategies for critical masses of mentees who are working in the areas of education and/or whose ancestral heritage is African. The Institute has further worked to create a community of thought and practice through the publishing of articles, blogs, and books, as well as speaking to other international students and groups around the world. A new book, The Redemptive Change Agent: How a New Vision for Christian Discipleship Can Help Nations Flourish Rather Than Flounder is currently being published by Wilberforce.

Christian Leaders in the making

Thangboi Haokip arrived at the University of Minnesota in January 2009 on a special fellowship from the US State Department.  He was not only eager to develop his capacities as an educator but also as a follower of Christ.  A month after arriving in US he connected Wilberforce International Institute and became an early program mentee.  With the help and mentoring of Wilberforce developed a plan to launch a K-10 Christian school for the poorest of the poor in the little village in NE India where he was from.  Now, over ten years later, 350+ students are enrolled in two campuses and receiving a quality education that multiplies the redemptive change started by Thannboi.

How has Wilberforce influenced you?

“My association with Wilberforce International Institute has enriched me simply beyond my ability to express. Wilberforce provided me with conceptual clarity about different worldviews, both Christian and those of other faiths and how these views impact/impacted the world.  Historic Christianity and Judeo-Christian culture as the foundation of Western/Modern civilization. I learned that God’s purpose and plan for mankind was to glorify Him and take care of His creation. I can help do this as a redemptive change agent in my own country.”

What redemptive work are you doing right now?

“Besides my professional work as a Public School Principal, I have founded an NGO and run several Christian Schools with an enrolment of 500 plus students. Our goal is to teach Biblical values so that in the future they become God glorifying future leaders. This is in addition to our Christian calling, as all Christians are called to, of witnessing and preaching the Gospel of our Lord.

“I have appreciated the genuine interest and encouragement of Wilberforce staff in its mentees. Spiritually, I very much appreciate the opportunity to connect with both staff and fellow mentees from a similar Christian worldview, to pray for WII and to be prayed for.”

“I have appreciated the genuine interest and encouragement of Wilberforce staff in its mentees. Spiritually, I very much appreciate the opportunity to connect with both staff and fellow mentees from a similar Christian worldview, to pray for WII and to be prayed for.”